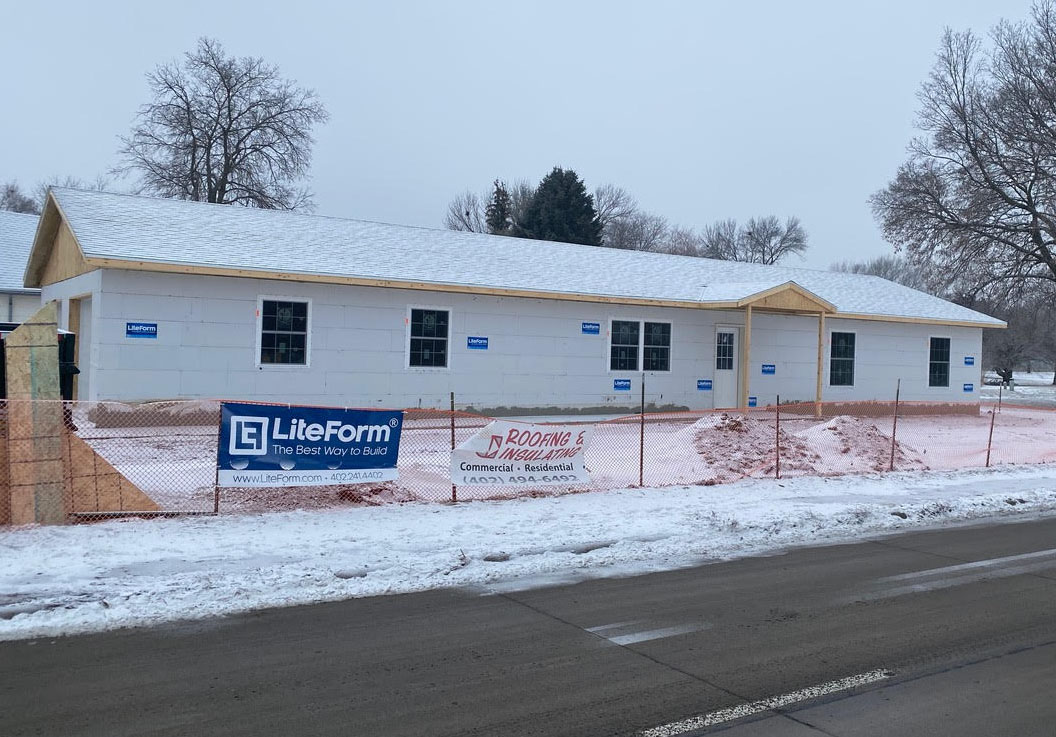 The construction project focused on energy conservation, speed of construction and strength. With fall and winter weather approaching, Joe and his students needed to move quickly to get the shell of the home weather tight. A slab on grade home was designed and began with LiteFoot by LiteForm which is a shallow frost protected footing form. LiteFoot eliminates traditional excavating of a 4’ frost wall. This considerably speeds up the construction especially during wet months when rains can erode any excavation that would occur and prolong the foundation construction time.

The shallow frost protected footings eliminate frost from penetrating the EPS forms and in turn, provide a solid, frost free foundation to build from. Once the footings were poured, it was time for the students to start setting the LiteForm Insulated Concrete Forms. This would be the first time the students used an ICF for forming concrete walls. “These students adapted to our building technology very quickly” says Pat Boeshart, President of LiteForm Technologies. Joe Krajicek, student instructor expressed initial concern. “I was worried at first we would not be able to get done during the school year and in the span of 2 weeks we went from not having a concrete floor to having concrete floors and concrete walls standing.”  With the foam insulated roof in place and the outside temperature in the lower teens, the only thing heating the inside of this 1500sq. foot concrete home is two small 1500 watt electric space heaters that keep the home at a comfortable 72 degrees while the students frame walls and run electrical. “Our main purpose for the “Let’s Build a House” project was real hands-on experience” says Joe. “There’s no comparison, students can read about it in class but when they actually do it, that is the best training tool of all”. A very enlightening moment came when conversations between the students and the professional contractors took place about the income they could earn and the lifestyles they could afford from working in the trades. Lance Swanson, Director of Communications and Foundation of South Sioux City Community Schools says “Unconventional thinking started this project and unconventional technology completed this project in a shorter amount of time and provided a stronger more energy efficient home.

The “Let’s Build a House” project has caught the attention of other state’s schools and will likely be a trend in the future for technical schools lacking in the building and construction field programs. Many schools are lacking the building trade and there is a major need for talented builders now, more than ever. It’s time we educate these young kids that want to learn the trades of building and construction. The trend of insulated concrete homes is on a major rise all across the country. “The simplicity and practicality is what drives this amazing product and it is paramount that we teach young professionals sustainable building techniques for the future.” says Pat Boeshart.

What Builders Need to Know About LiteBar Fiberglass Rebar
July 25, 2018